As a dive instructor and the Greater Cleveland Aquarium’s Dive Safety Coordinator, PADI International Women’s Dive Day is a special time to share what I love. From my perspective, SCUBA diving has great value. It is a lifelong skill and a key to a hidden world. Diving also helps to build confidence, foster new relationships and cultivate a sense of independence.

What else is out there in the two-thirds of our planet covered by water? The sea provides a limitless number of new experiences. As a dive professional who does hundreds of dives a year, you may think I have become immune to the wonder and amazement diving provides, but I am constantly marveling over new sights and new interactions. For example, I was diving with sharks when a large, fully grown female tiger shark swam over to me, looking into my eyes with her massive ones before nudging me out of her way. Interactions like these, while being REALLY COOL, also cause a change in perspective. This mighty creature wasn’t interested in confrontation. We were able to coexist peacefully in her world. Intuitively, I knew she was not seeking to harm me but now I have lived it. I have had experiences many only dream of and from them I have learned to think for myself to form my own opinions. I now relish the times where my comfort level is exceeded by a large shark’s close encounter.

Diving is all about personal growth and development. In challenging you to do things you find uncomfortable and allowing you to struggle until you learn to put all of the pieces together, diving helps you build confidence. When teaching someone how to dive, there inevitably are skills that give each student difficulty. Coaching them through and past these difficulties is rewarding for both me and them. For example, the fundamental SCUBA skill of clearing your mask is not as simple as it might seem for new students. While it’s not a technically tricky skill, it requires mental strength to overcome the discomfort of having water on your face. This breakdown—when our brain tricks our body into panicking—must be controlled from within. This self-governing, self-control aspect of SCUBA diving sets a foundation for learning how to overcome mental obstacles in everyday life. 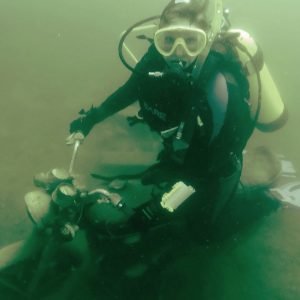 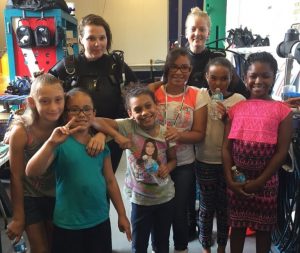 Let’s take a look at our women divers in action! 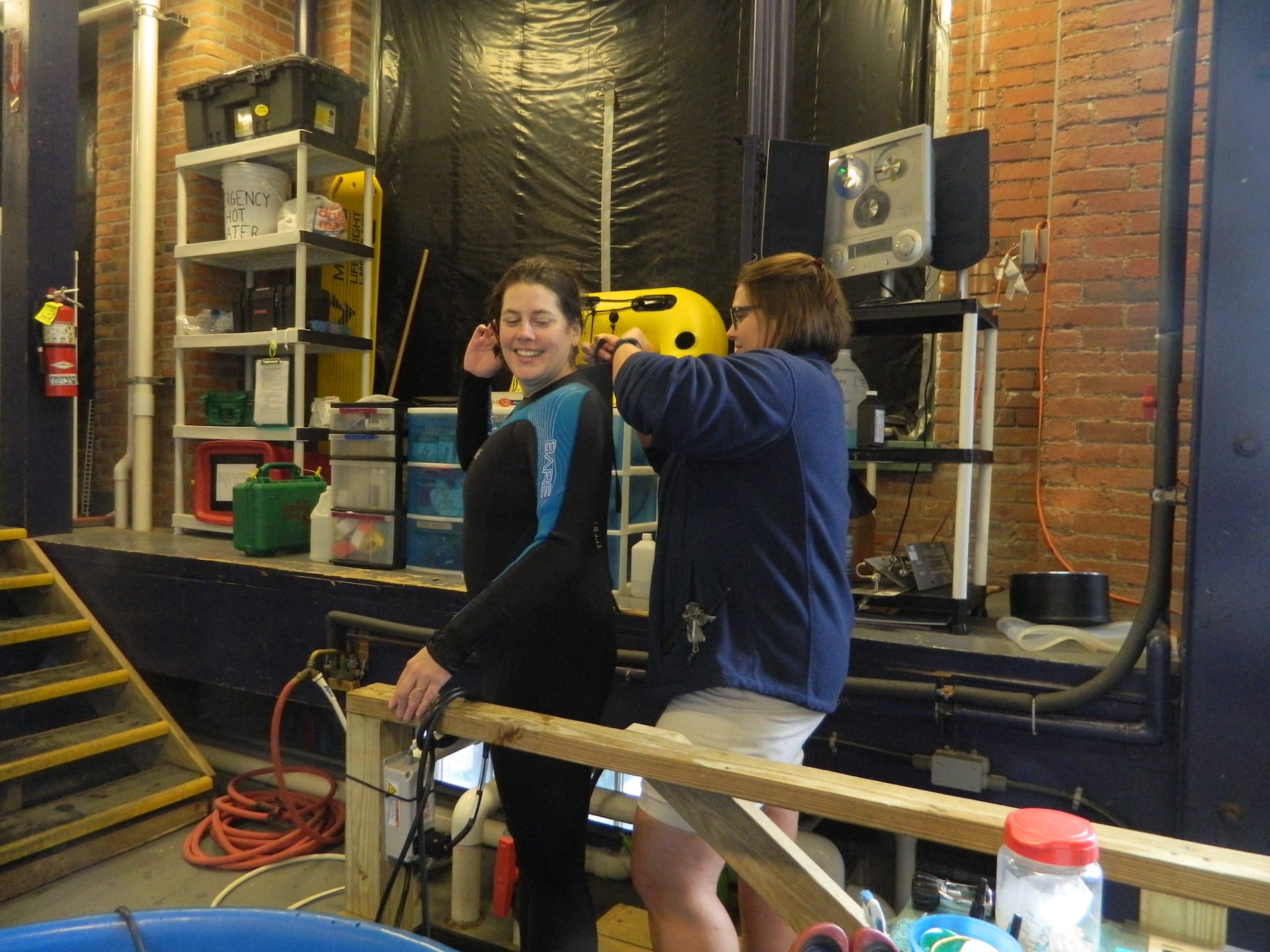 Our diver suiting up for a swim with the sharks. 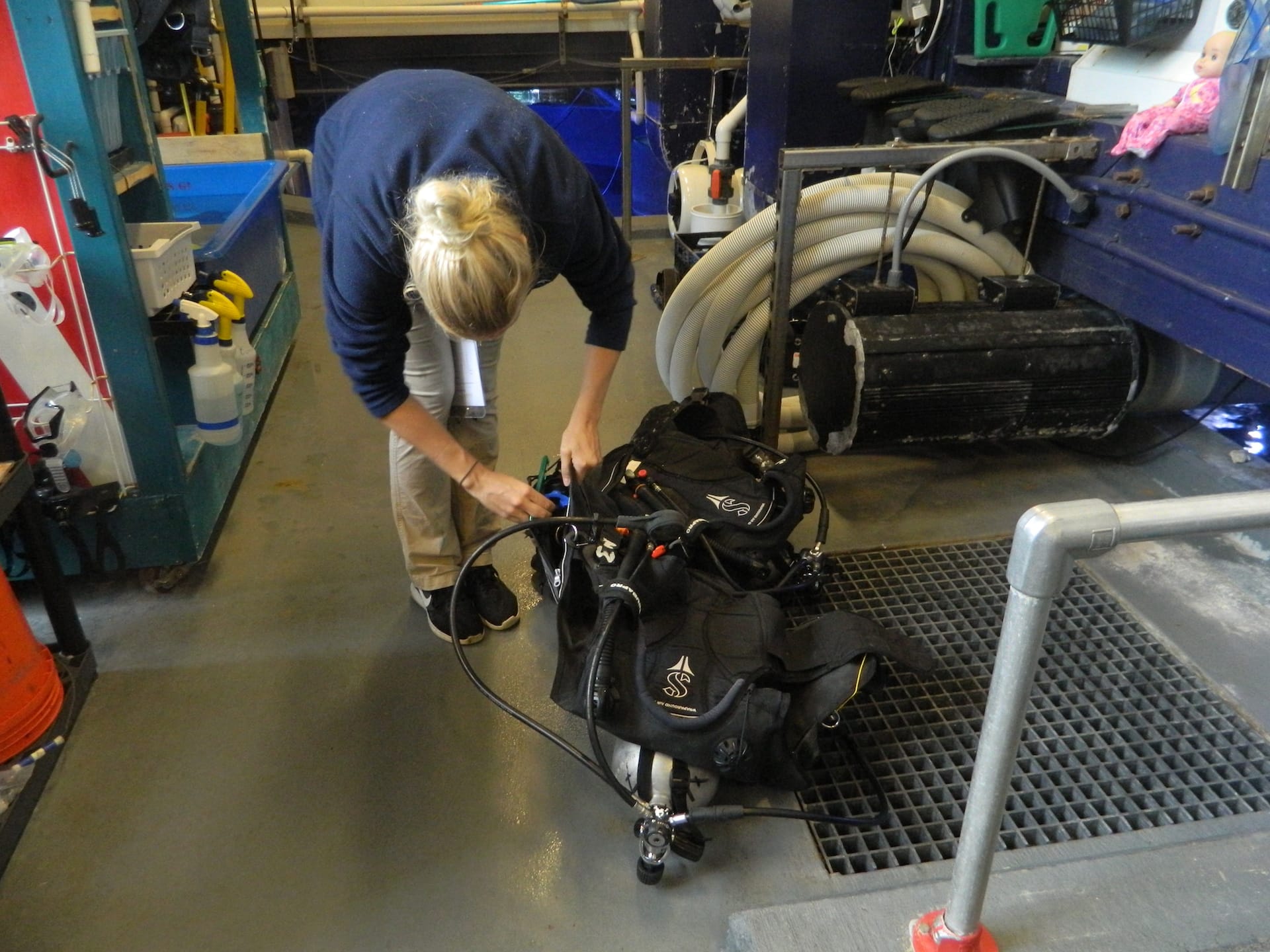 Getting the diving gear ready to go! 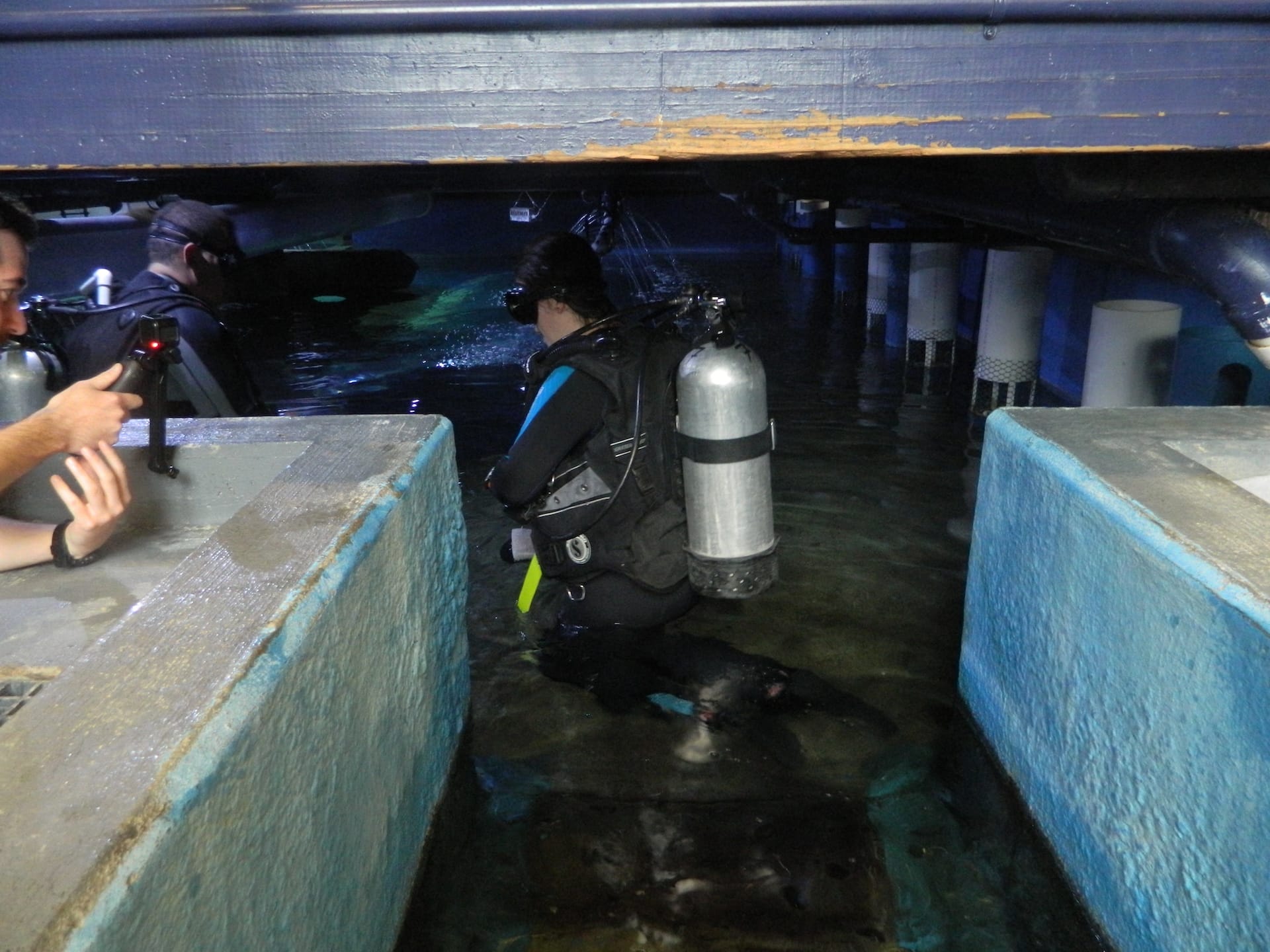 Heading into the tank for one of our four daily dives for the day! 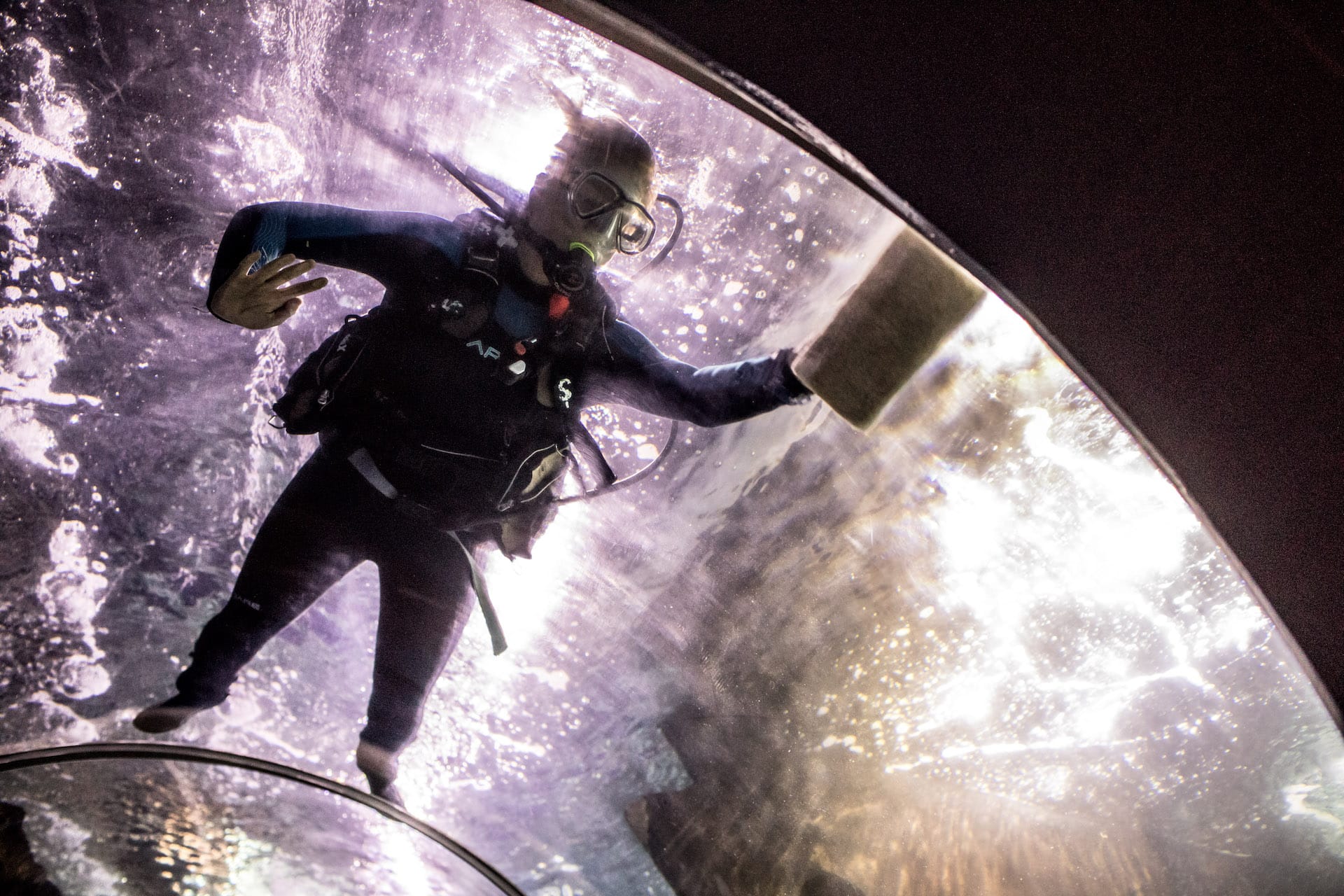 Twice a day, our divers will do a maintenance dive as well as two full face mask dives. 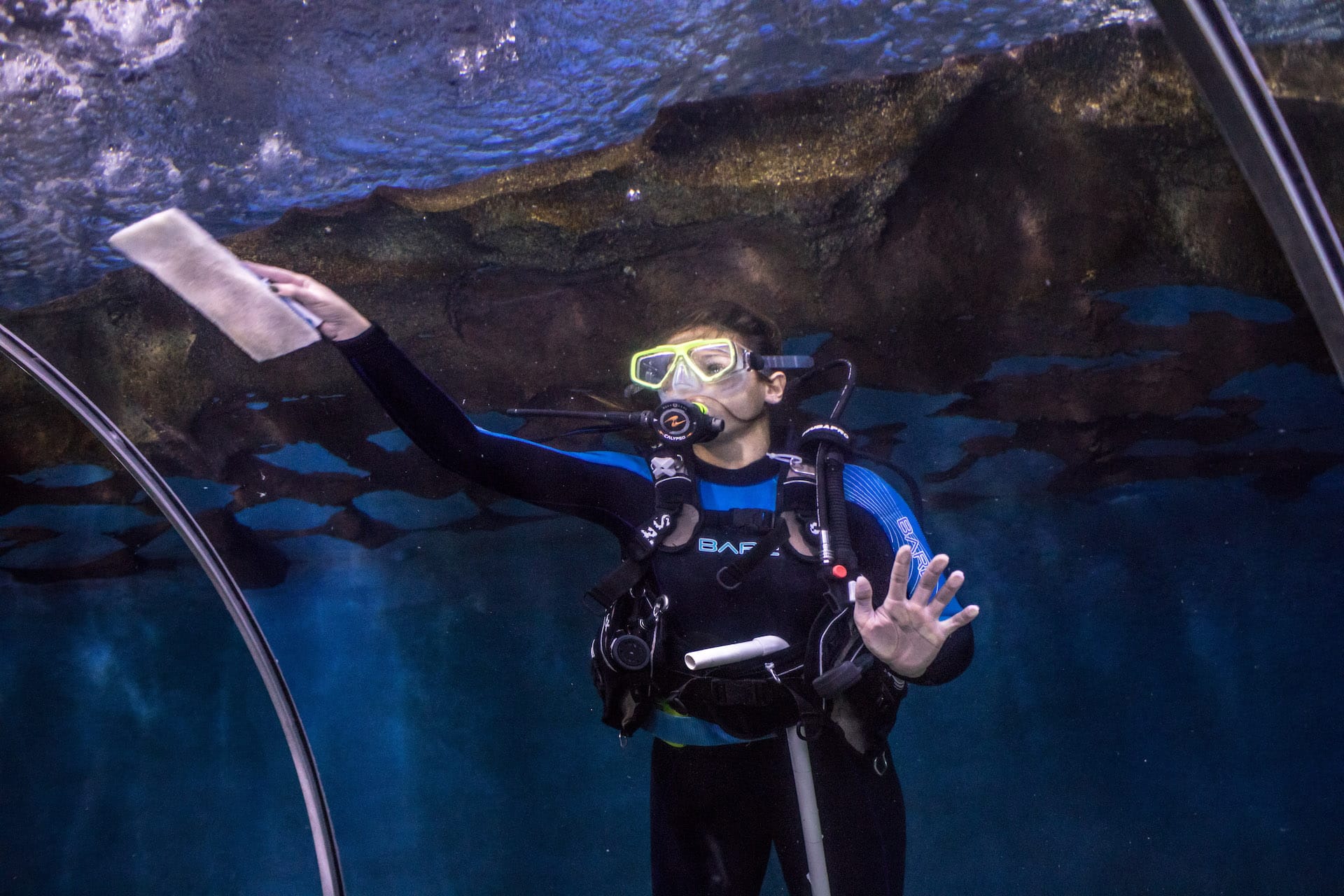 Our divers do an outstanding job cleaning our exhibits and keeping them looking squeaky clean for our guests. 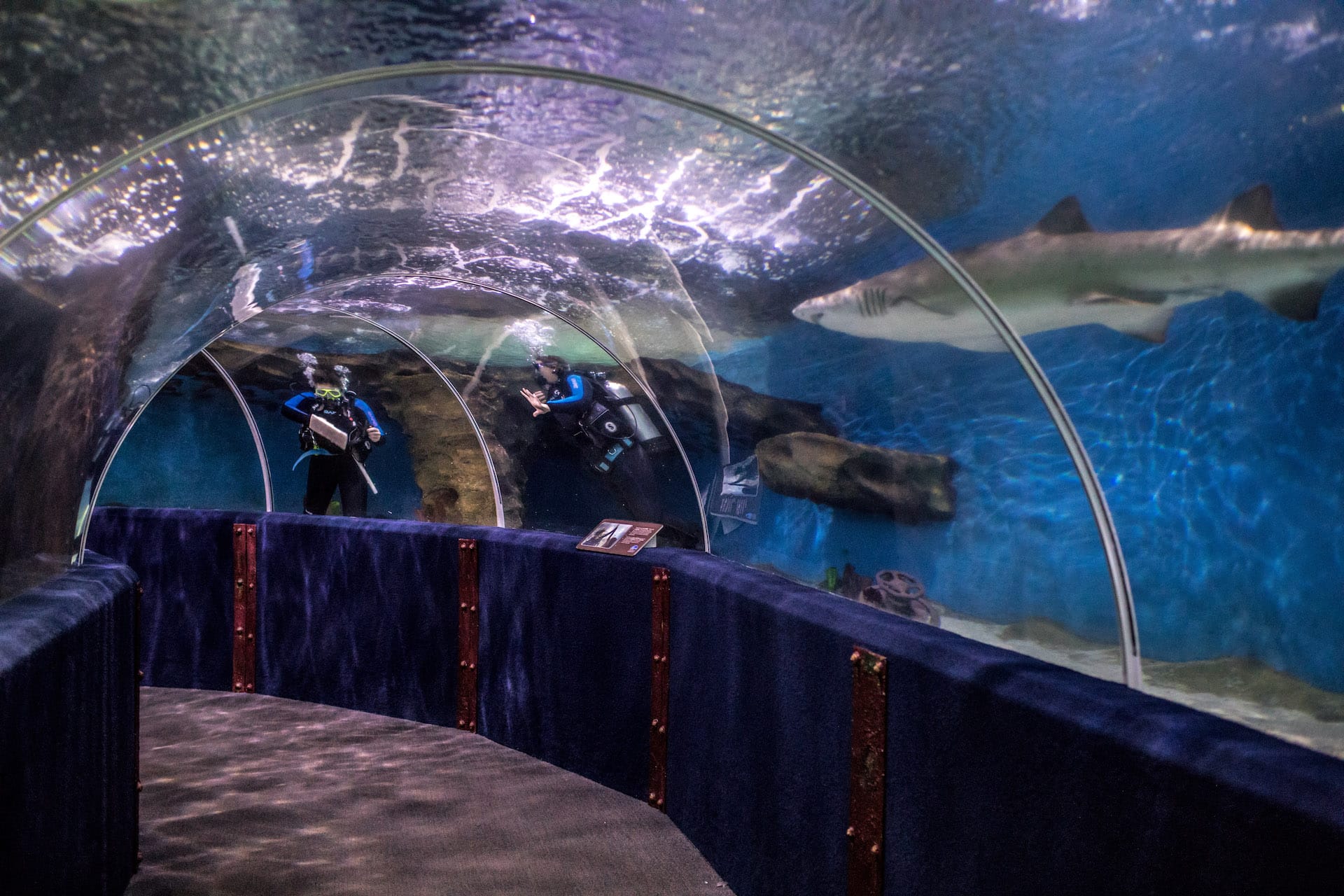 Dive shows are a great way to learn more about our divers and what their job entails. Guests are able to interact with the divers and get to experience some of their daily tasks. 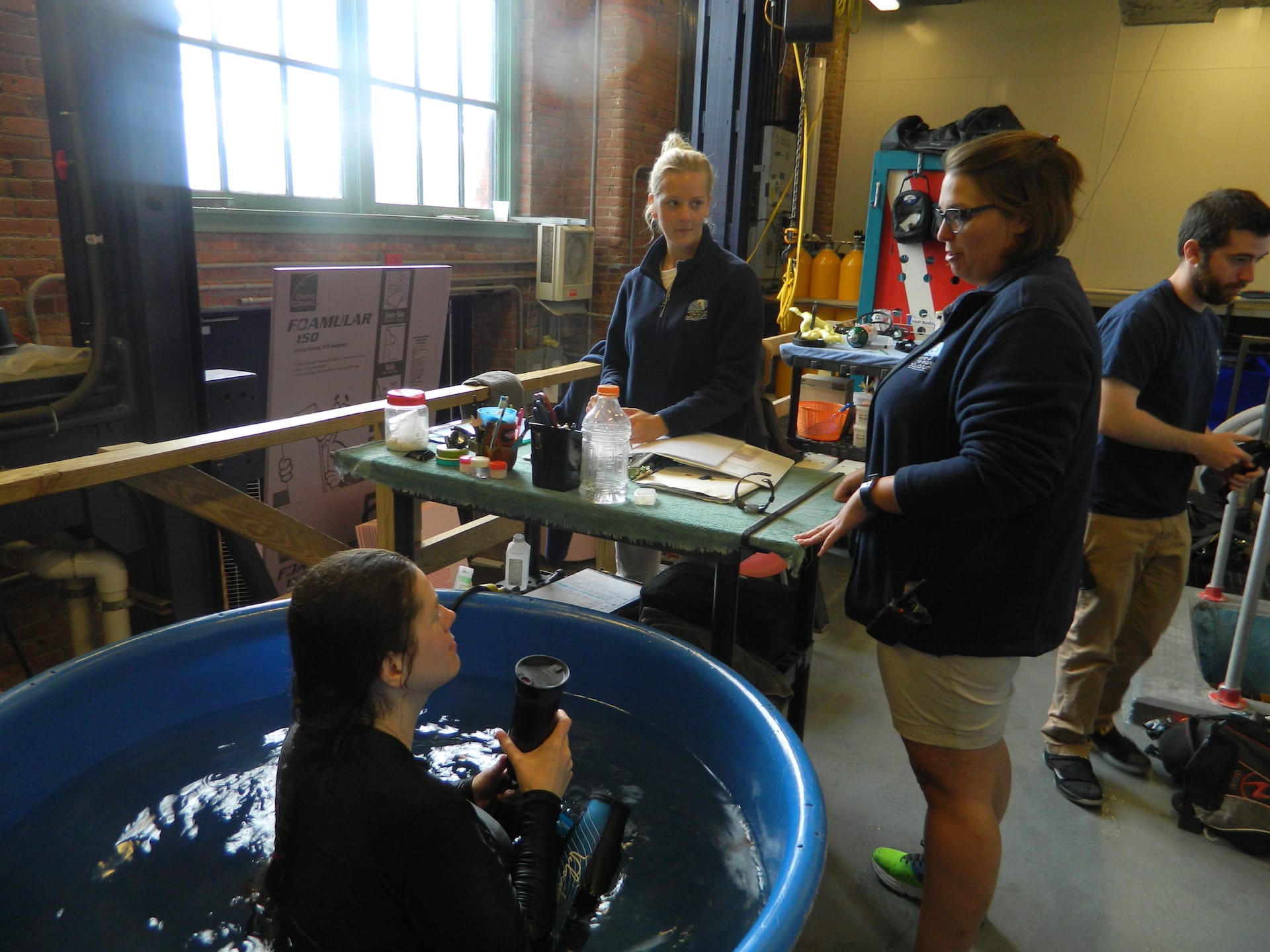 Our divers sanitize after every dive to make sure they don’t contaminate the water when going from fresh to salt water or vice versa. The divers also clean the corridor exhibits, in addition to the sea tube pictured above.

We recently saw 47 Meters Down. The new shark thriller starring Mandy Moore is designed to get your heart pumping, for sure. The fact that the silver screen has a habit of making us unnecessarily scared of sharks aside, the things that made us fear for the survival of the novice diving duo at the center of this horror flick had nothing to do with the animals that surrounded their dive cage.

1. Inexperienced divers going to significantly deeper depths than those for which they are trained can be a recipe for disaster even without a shark in the mix. Due to the effects of pressure, the volume of air a diver consumes in a given time typically increases with their depth—go deeper breath more. Other factors can also cause a diver’s air consumption rate to increase including exertion while swimming, speaking and cold water, just to name a few. Stress is also a major contributor to air consumption so two inexperienced divers being harassed by sharks like those portrayed in the film would result in a drastic increase in air consumption. At 47 meters even an experienced diver with a fantastic air consumption rate would quickly drain their scuba cylinder, probably in less than 20 minutes. An inexperienced diver swimming, talking and being harassed by sharks MIGHT make it five minutes at that depth.

2. The full face mask system used in the movie would be extremely dangerous for these inexperienced divers. Humans convert 5% of the oxygen we breathe into carbon dioxide which is then exhaled. The masks in the film do not have separate chambers for new and exhaled gas which would result in the diver breathing in carbon dioxide. The effects of breathing carbon dioxide on the surface are rapid breathing, rapid heart rate, fatigue, nausea and headache. Other, more severe effects can develop if the carbon dioxide exposure is not reversed. Underwater all of these effects would be more even sudden and life threatening.

3. According to the US Navy dive decompression tables a diver may spend up to five minutes at 160’ (47 meters) without needing to decompress during their ascent. The longer a diver stays underwater the greater their exposure to “the bends” becomes. The bends is a layman’s term for decompression sickness, which is caused by the accumulation of nitrogen breathed under pressure. This does not pose a problem until a diver begins to surface and nitrogen bubbles form in the bloodstream. The bubbles can cause the bends. The amount of time it would take a diver to safely surface increases as the amount of time s/he spends at that depth increases. It would actually take more than four hours to safely surface from a 60-minute dive at a depth of 160 feet.

4. Another risk often faced by divers at depths exceeding 80 feet is nitrogen narcosis. Commonly referred to as “rapture of the deep,” nitrogen narcosis makes a diver feel and act like they are inebriated, lacking inhibitions and generally numb to any concerns. Luckily nitrogen narcosis has not been known to leave any lasting effect so long as divers recognize it and ascend enough to limit its effects. It is easy to imagine the havoc nitrogen narcosis could play on a diver who needs to be very mindful of their surroundings and sharks!

5. Even in warm water hypothermia is a risk. Not wearing a proper fitting full coverage wetsuit can set up a diver for problems. Water can pull heat away from a diver’s body 25 times faster than air. Hypothermia’s effects on the body start with shivering which can become violent and lead to loss of coordination and function. In bikini-style suits the likelihood divers at 47 meters down would experience more than just a mild hypothermia is high.
Given the depth, equipment, clothing and stress factors, it would be a challenge for the most experienced divers to survive under these circumstances.