What can I do, here in Ohio to help protect the coral reefs thousands of miles away? The answer may surprise you. There are numerous ways YOUR individual actions can either hurt or help coral reefs around the world. One such action is the selection of your sunscreen! The sunscreen you have at home may contain chemicals that are extremely dangerous for coral reefs.

Sunscreens are important to us they help prevent skin damage from the harsh ultraviolet rays of the sun. But, the protection of our skin comes at a cost, a few of the chemicals used in sunscreens have been found to have negative effects on coral reefs.  The ingredient oxybenzone is found in 65% of non-mineral sunscreens and it has recently been discovered to damage coral DNA. Oxybenzone, while thought to be an important ingredient for sunscreen has been found to negatively impact coral reefs across the globe.

In 2005 Dr. Craig Downes and the United States National Park Service were working in collaboration to uncover the cause of coral losses in the U.S. Virgin Islands when they stumbled upon the role sunscreen played in coral death. The tourists, sunbathers, snorkelers and divers lathered in sunscreen and to enjoy turquoise blue waters were introducing chemicals that kill the very corals and damage the ecosystem they are trying to enjoy.

It is estimated that every year swimmers, snorkelers and divers introduce 14,000 tons of sunscreen to coral reefs. This introduction of the harsh chemical components in sunscreen, sea temperature rising and ocean acidification have worked together to create the perfect storm for coral reef destruction. Corals are living animals, not plants, these tiny animals build the foundations of the reef out of limestone. The tiny coral polyps live in large communities and play host to a special alga called zooxanthellae.  The zooxanthellae live inside the coral and share food they produce from photosynthesis in return for their safe housing.

So, what can you do to help the coral reefs?

Consider looking into some of the many “reef safe” sunscreen options and/or avoiding the need for sunscreen by wearing a hat or UV-safe long sleeved shirt and pants to protect your skin.  Alternatively, stay indoors instead of in the sun entirely.  We need to be more aware of the impact of our actions even though they may seem inconsequential.  Some states have begun to regulate the chemical components in sunscreen to help keep their coral reefs healthy.

Do your part and think about what you put on your body and into the ocean and coral reef ecosystem!

Coral reefs are some of the most important habitats that have developed over hundreds of millions of years on Earth.  Most people believe that corals are plants, but they are actually invertebrates with simple stomachs and a single mouth, much like jelly fish and sea anemone. Although they roughly occupy less than 1% of the ocean floor, coral reefs are home to about 25% of all ocean species!  They comprise the largest living structure in the world and can even be seen from outer space, and with all that biodiversity they are important to much more than just themselves.  Unfortunately, coral reefs are diminishing right before our eyes with climate change, greenhouse gas emissions, and ocean acidification altering our oceans water chemistry.

Ocean acidification has caused the chemistry of our oceans to change drastically in a relatively short period of time.  Since the industrial revolution, the burning of fossil fuels for cars, industries and electricity has left the world in a cloud of continual CO2 emissions that collect in the atmosphere.  With our oceans taking up about two-thirds of Earth’s surface, they are the largest source of CO2 removal from air.  The oceans remove about one-third of all CO2 emissions from the atmosphere, but when too much carbon dioxide is absorbed into our oceans it can be harmful to the animals living within them. 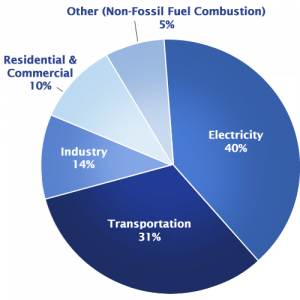 When CO2 is introduced to saltwater, it causes complex chemical reactions that ultimately increase the acidity of the water. Ocean water pH stayed stable over the last 300 million years, around 8.2, which is the most comfortable region for corals to grow and flourish.  Since the industrial revolution, we have seen a pH shift from 8.2 to around 8.1 and 8.0 in certain regions of the world.  Although a 0.1 or 0.2 decrease in pH seems extremely small, it actually accounts for a 25% increase in acidity in only 100 years!  These drastic changes in the pH and temperature of the oceans in a very short period has left many of our animals in shock, especially our corals.

Corals natural environment and comfortable living conditions are quickly changing in a way that’s not unlike animals that lose their habitats to deforestation or natural disasters.  Most corals are not able to acclimate to the more acidic environments that have come about in the last 100 years.  In turn, corals become so stressed out by the changing water chemistry that they ultimately undergo coral bleaching events. 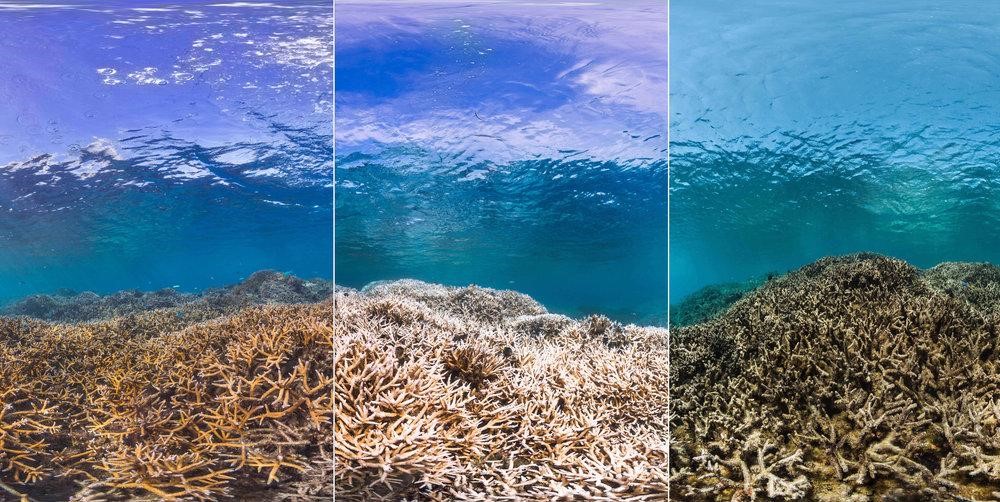 Individual corals are called polyps and multiple coral polyps in an area are called a colony.  There are both hard and soft corals that live in the ocean, but most of us have seen hard corals that live in shallow tropical waters.  These hard corals have a calcium carbonate structure that would be similar to our bones.  Polyps grow off this skeleton that contain algae called zooxanthellae. Zooxanthellae not only give corals their bright, vibrant colors, but also support the life of these corals by helping trap food and offering protection. 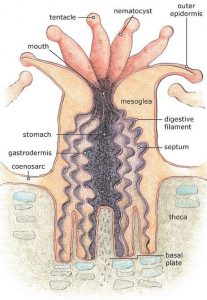 During coral bleaching, acidic waters cause corals to “kick out” the zooxanthellae living in their polyps.  Once this happens, the coral is not able to protect itself or get the food it needs and in turn, the polyps begin to peel off the skeleton like fleshy material until only the calcium carbonate skeleton is left.

So why should we care about coral bleaching?  First of all, corals are one of best places for life to flourish!  With nearly 25% of all ocean species living on or near coral reefs, they offer homes, protection and food for many animals.  Coral reefs are also a great barrier to coastal areas when there are hurricanes and rough waters as they block water from flooding and destroying natural coastal regions.  Additionally, tourism in many places will drop off without the reefs.  Some regions depend on the natural beauty of coral reefs as a source of income for aquatic excursions.

Even though it might sound like corals as we know them have come to their end, there are steps we can take to have a positive impact.  Educating ourselves and others about the harmful effects of CO2 emissions is a critical step.  Emphasizing careful viewing of corals is also important. (Humans shouldn’t touch, pick up or take home wild corals any more than we should sharks, eels, jellyfish and other living things.) We can support research institutions such as Mote Marine Laboratory or the Coral Restoration Foundation Education Center that are devoted to learning more about coral and saving our reefs.  And, most directly, we can cut down on our CO2 emissions in any way possible.  This could mean using less energy and water at home, riding bikes to school or carpooling to the places you need to go, recycling products we use every day and making sure we aren’t polluting our water ways. For more information about coral bleaching, check out Chasing Corals, an amazing Netflix documentary that shows the harmful effects of coral bleaching and highlights some of the great people out there working to restore our reefs. https://www.youtube.com/watch?v=b6fHA9R2cKI 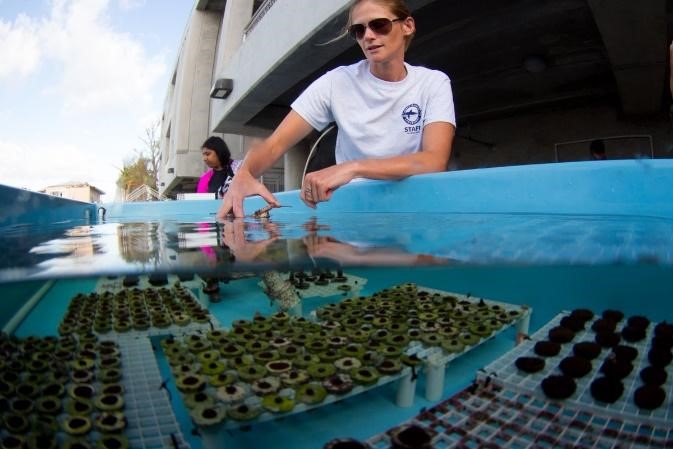 One of the most biodiverse ecosystems in the world, coral reefs are in serious peril. Coral reefs take up about 1% of the ocean floor but are home to 25% of all ocean species including more than 4,000 species of fish.

What is a coral reef?

Coral reefs are colonies of individual animals called polyps. The polyps have tentacles to feed on plankton at night and they play host zooxanthellae—symbiotic algae that live within the coral’s tissues and gives them color. The algae need carbon dioxide and waste products from the coral for photosynthesis. In turn, through photosynthesis the algae nourish the coral with oxygen and organic compounds. The coral uses these compounds to synthesize calcium carbonate (limestone) with which it constructs its skeleton.  This skeleton contains bands, like tree rings, that record environmental changes in temperature, water chemistry and water clarity. 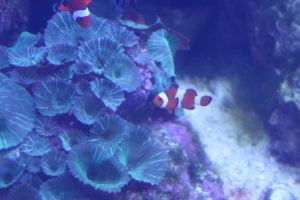 Why should we care about coral reefs?

Coral reefs are also known as the speed bumps of the ocean. These structures act as a natural barrier, helping to slow down and shrink waves hurtling toward the shoreline and thereby protecting coastlines and the 200 million people living along the coasts from hurricanes.

We receive many other benefits from coral reefs. Stationary animals, coral are constantly evolving chemical defenses as protection from predators.  Scientists are developing new medicines from the coral-produced compounds to help treat cancer, arthritis, bacterial infections, Alzheimer’s disease, heart disease, viruses and many others.

Coral reefs also provide us with food and construction materials. They also contribute heavily to the economy via tourism.

Why are coral reefs endangered?

Believe it or not coral reefs can get stressed out! There are a variety of different factors that contribute to the stress of coral reefs. For example, rising temperatures globally causes coral bleaching. Also, additional carbon dioxide oceans absorb every day contributes to increased acidification which reduces the water’s ability to carry the calcium carbonate that corals need to build skeletons.

Additionally, overfishing is changing the coral reefs ecosystem with anchors and nets destroying the natural habitat.  And when sediment and other pollutants settle on coral reefs it can speed the growth of damaging algae and lower overall water quality. With lower water quality the sunlight may not be strong enough to reach the zooxanthellae to go into photosynthesis. 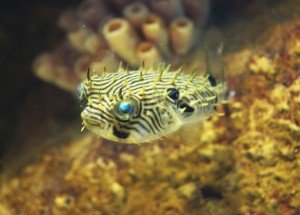 How can we help?

Scientist are working to find some solutions, but all of us can join the effort to help coral reefs by reducing our carbon footprints. Try recycling or using more reusable products. Join the skip-the-straw movement reducing single-use plastic waste. Only eat fish sourced sustainably. Or, donate to organizations and support companies committed to cleaning up our oceans.