The Cuyahoga River famously caught fire on June 22, 1969, inspiring several songs and sullying Cleveland’s reputation for generations. But do you know the real history of our beloved river?

The Cuyahoga River officially begins about 35 miles east of Cleveland and continues its 85-mile journey south to Akron, where it turns sharply north and flows through the Cuyahoga Valley National Park to Lake Erie. The depth of the river ranges from 3 to 6 ft. except at the last 6 miles, where it is dredged to a depth of 27 feet.

Originally the river bed’s last bend took the mouth westward along the lakeshore to W. 54th St., until the present mouth was dug in 1827 to form Whiskey Island and a more direct channel which leads straight into Lake Erie.

The Cuyahoga is not the only river that caught fire in US history. Rivers in Washington, D.C., Omaha, Buffalo, Dearborn and Philadelphia all caught fire as well.

By 1968, the reach from Akron to Cleveland was devoid of fish. Mayor Carl Stokes began advocating to clean up the river. Cleveland voters approved a $100 million bond issue to finance river cleanup efforts, including sewer system improvements, debris removal and stormwater overflow controls.

On June 22, 1969, just before Neil Armstrong and Buzz Aldrin land on the moon, the river burned for the last time. The event was not considered “big news” and in fact there are no photos of the actual fire since news media did not make it there fast enough. However, on August 1, 1969, that small fire on the Cuyahoga river captured the attention of Time magazine, which described it as the river that “oozes rather than flows” and in which a person “does not drown but decays”.

Inspired by the 1969 river fire, the Time article and other initiatives, Congress passed the National Environment Policy Act (NEPA) which was signed into law on January 1, 1970.  This act helped establish the Environmental Protection Agency (EPA). One of the first legislations that the EPA put-forth was the Clean Water Act (1972), which mandated that all rivers throughout the United States be hygienic enough to safely allow mass amounts of swimmers and fish within the water by 1983.

The river’s water quality finally began to improve during the following decades, and by the 1980s business investors capitalized on this by converting parts of the Flats’ abandoned industrial landscape into an entertainment district featuring restaurants, nightclubs, and music venues.

Recent water tests have found the cleanest river readings in the past 20 years and it is now home to about 60 different species of fish. The river continues to serve as the center of an active maritime industry, a growing recreational attraction, the link that connects the cities of Cleveland and Akron, the home of a national park, and the hub of Cleveland’s urban revitalization.

It took us about 100 years of fires on the river to finally take action, but once we did, the river reached an acceptable water quality level in less than 50 years. There’s still work to be done, but going from 0 species of fish to 60 species of fish represents great progress. And in the future, our hope is that the burning river will only refer to a really great beer.

If you have a group that would like to learn more about a #riverreborn, please contact us to have a speaker make a presentation! 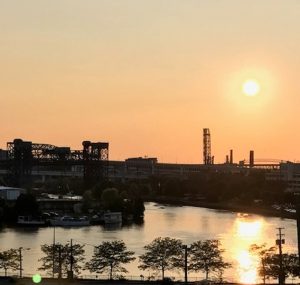