Greater Cleveland Aquarium is proud to announce the arrival of newborn weedy sea dragons, a species that has proven to be exceedingly difficult to rear. Since the first successful weedy sea dragon hatching in 2001 at the Aquarium of the Pacific, fewer than 20 facilities worldwide have had any level of success with mating and only an estimated dozen of those have had fry survive.

A delicate species whose survival has been tested by habitat degradation, weedy sea dragons are native to the cold coastal waters of south and west Australia.
“Weedy sea dragon births are exceedingly rare, and this would be a point of pride for any animal care facility, but it’s a particularly exciting for an aquarium of our size and age,” says General Manager Stephanie White, who has been with the downtown Cleveland destination since it opened a decade ago in January of 2012.

Greater Cleveland Aquarium is housed in a brick building dating back to 1892, and Curator Ray Popik believes the creativity required to reimagine the historic space contributed to his team’s success breeding sea dragons. “We were able to home the sea dragons in a very deep exhibit built into a structure that likely served as an air duct or a coal chute when this building was an operational powerhouse,” says Popik, explaining, “Its depth provided an optimal habitat for the seahorse relatives who court with an elaborate vertical dance.”

After a female weedy lays her eggs, they are transferred to the male who, similar to its pipefish cousins, is then responsible for fertilizing and carrying them until they hatch. “This was actually the second time one of the female sea dragons in our care deposited eggs on a male’s tail,” says Popik.

While the initial egg transfer in January of 2020 was likely too early in the Aquarium residents’ development to result in viable offspring, the initial mating and successful deposit was an indication that the sea dragons—who came to the Aquarium in March 2018—were thriving. “Animals need to be healthy, have good nutrition and be acclimated to mate,” explains Popik. “We felt the odds they would try again were good.”

A second mating attempt in September of 2021 resulted in another clutch of eggs and fry popping out between late-October and the beginning of November. The hatchlings were moved behind-the-scenes. “There’s no parental involvement after birth and it’s incredible that any of these tiny offspring survive when they’re left to fend for themselves in the ocean,” says Mallory Haskell, the primary aquarist responsible for their monitoring and delicate care. Not particularly strong swimmers, weedy sea dragons’ leaf-like appendages blend in with kelp and seagrass help hide them from predators.

Greater Cleveland Aquarium plans to put some of the young on public view soon in a temporary exhibit just down the corridor from the adult weedy sea dragons. “It’s been amazing to watch these animals develop and we want to give that opportunity to others if we’re able,” says White.

The process has been full of ups and downs, but Haskell is optimistic. “If raising weedy sea dragons was easy, everyone would do it,” she says. “We know there are challenges ahead, but we hope we will see a number of these sea dragons reach full size in a year or so.”

Seahorses are one of the most well-known and recognizable creatures in the ocean. Their long snouts and curly tails are clear giveaways of their identities. However, these characteristics are not exclusively associated with seahorses. Located in the waters of southern Australia lives an obscure relative of the seahorse: the seadragon. Seadragons are in the same family as seahorses (Syngnathidae) but they are different in a number of ways. Seahorses are quite common and are found in tropical and subtropical waters all around the world, while seadragons are exclusively found near Australia. Also, there are many species of seahorses (around 47) and only three species of seadragons. 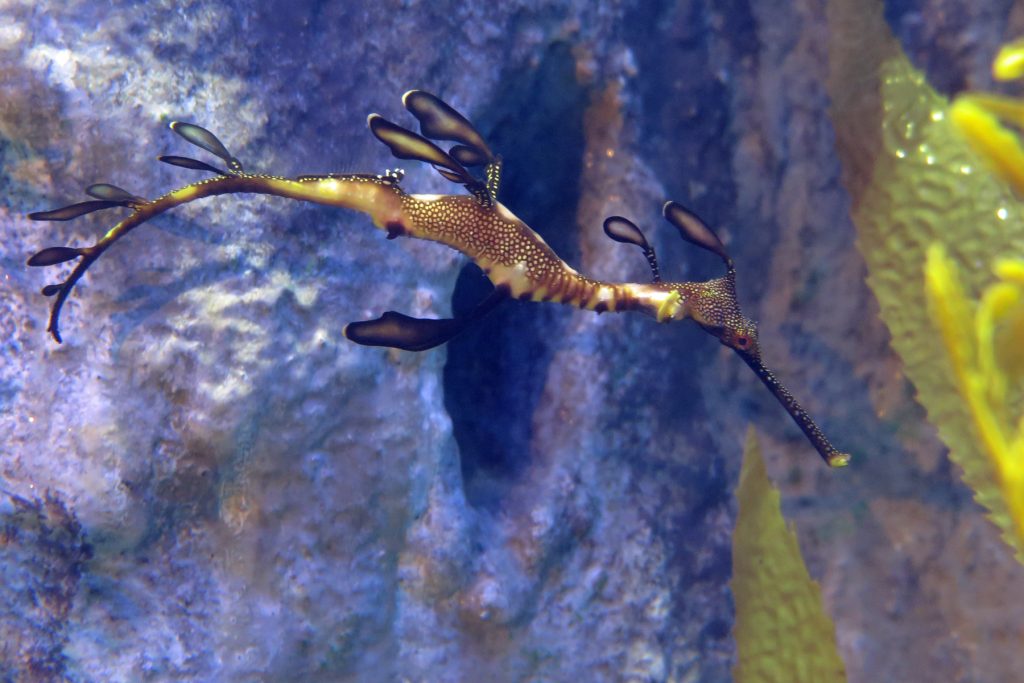 Aside from taxonomic classifications and geographic distributions, the main differences between seahorses and seadragons are physical. Seahorses are known for having a prehensile tail, which means they can use their tail to grasp onto things such as plants or even each other. Since seahorses are not good swimmers, the prehensile tail allows them to anchor themselves so they do not get swept away by currents and can remain hidden from predators. Seadragons lack this prehensile tail and rely on camouflage to avoid predation. They have leaf-like appendages to resemble the underwater plants around them, allowing them to blend into their surroundings. In addition, seadragons have slightly longer snouts than their seahorse relatives.

Another one of the main differences between seahorses and seadragons is the way they carry their young. Both seahorse and seadragon young are carried by the males, but in different ways. Seahorse males have a fully enclosed pouch into which females deposit eggs; the males carry those eggs until the young hatch. Seadragon males have a spongy patch located underneath their tail where they carry the eggs.

Besides these main differences, seahorses and seadragons are actually quite similar. At the Greater Cleveland Aquarium, we have one seahorse and one seadragon species. The next time you visit, keep an eye out for the potbelly seahorse (Hippocampus abdominalis) and the weedy seadragon (Phyllopteryx taeniolatus) and see if you can notice their differences! 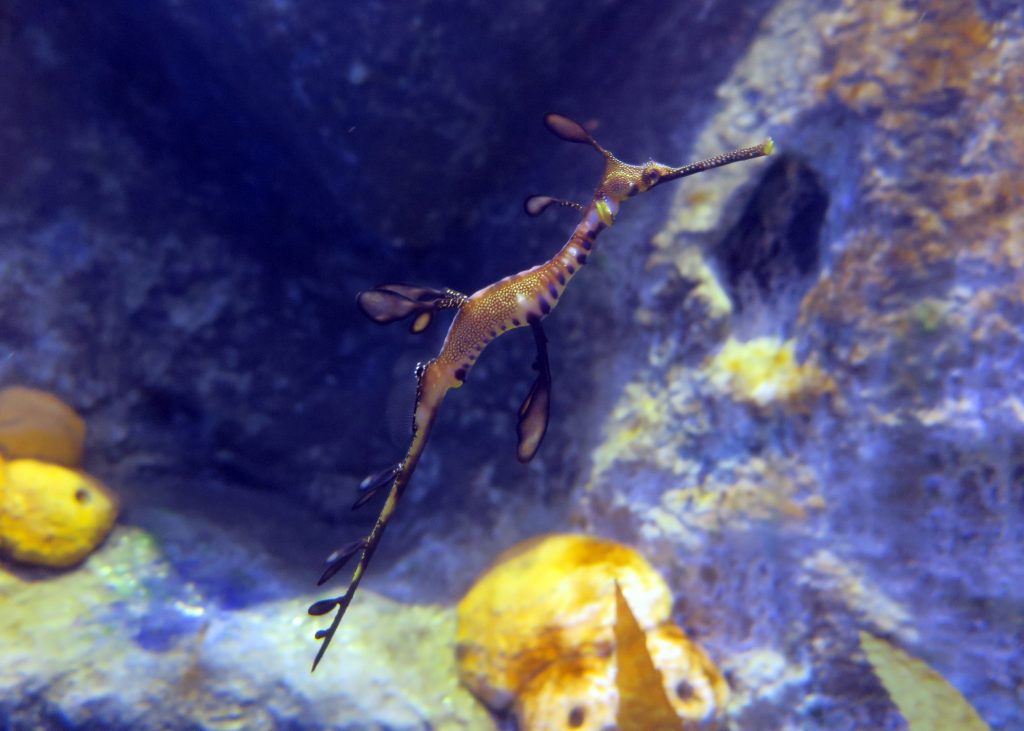 • Kelly, Jasey. “The Differences between the Sea Dragon & Seahorse.”