Quickly swimming at the surface, Anableps anableps can be difficult to spot despite the fact that they swim in schools. Let’s get a closer look at these unique fish.

It might be hard to find a bushynose pleco, but that’s by design! Take a closer look at this bristlenose catfish in the video below.

This colorful, eye-catching fish is a red terror cichlid (Cichlasoma festae). It can grow to lengths of 12 – 20 inches and live somewhere between 12 – 20 years. But what else do we know about it?

The red terror cichlid in the Aquarium’s Tropical Forest Gallery is hard to miss. Stop by and see this and many other very different but equally intriguing cichlids at the Greater Cleveland Aquarium. Nature. It’s a curious thing.

The  Greater Cleveland Aquarium is a partner in SPOTD, a cross-organization collaboration to boost the number of spotted turtles in Northeast Ohio. Learn more about these attractive little turtles here:

Nature. It’s a curious thing. To see a spotted turtle and learn about the Splash Fund, Wild4Ever Foundation and Terrestrial Brewing Company‘s “I Love It When I Save the Turtle Porter, visit the Greater Cleveland Aquarium’s Ohio Lakes & Rivers Gallery.

“Is that fish a girl or a boy?” is a common question we get asked at the Aquarium.  With some species it is a very easy question to address but with others it can be a bit more complicated.  (Sometimes the answer can even be both!)

If a species is sexually dimorphic, males and females will look different from each other.  Sometimes this is just a subtle variation in color or shape but it can also mean the two sexes look radically different from one another. A good example of this is a species of angler fish. The females of this species can grow to over a foot long, while males only grow to about half an inch! 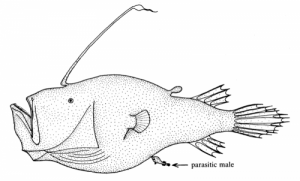 Some species of fish show no sexual dimorphism and it can be impossible to tell the difference between males and females without looking inside the animal’s body.  For some species at the Aquarium we can make an educated guess based on mating behaviors, but for others we just don’t know. The green moray eels in the Shark Gallery are one example of a fish that has no sexual dimorphic traits. Both sexes look identical.

One of the most recognizable fish at the Aquarium is the clownfish.  What some people don’t know is that clownfish are actually sequential hermaphrodites—protandry to be exact. When it comes to clownfish hierarchy, the female is dominant.  She is the largest fish in the group and the next largest is her male mate. The remaining fish in the group are smaller, undeveloped and unable to breed. If the female dies, the largest male then grows and becomes female and the next fish in line matures to assume the role of breeding male.

Groupers, angelfish, gobies, damselfish and wrasses (my favorite being the rooster hogfish) all fall under the protogynous category.  This means that these species start out as females and can quickly switch and become males if the dominate male leaves.  This type of hermaphroditism is more common and benefits the fish by allowing them to produce the maximum number of offspring.  It is a size-based reproductive strategy with large, strong males protecting the nesting sites of many smaller females.  For these species it is beneficial for females to produce many offspring while small and then become males when they themselves are bigger.  It is also beneficial because it’s a big ocean out there and sometimes difficult to find another member of your species let alone one of the correct sex. The ability to switch sexes means these fish have more opportunities to find a mate.

Hermaphroditism has evolved independently in fish many times and has proven to be a successful reproductive strategy throughout the animal kingdom. 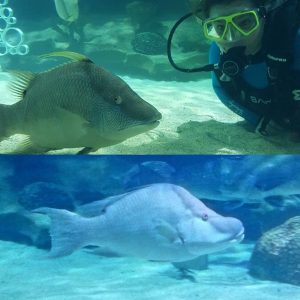 Rooster hogfish are both sequential hermaphrodites and sexually dimorphic.  Can you spot the differences between the female (top) and the male (bottom)?